Okay, I have been talking about persecution in Pakistan in my last post. I think almost everyone knows that it is kind of a dangerous place, especially if you are a minority. The incident of which I am about to share happened in late 2007. The big angry mob, set fire to a whole Christian village. They caught a Christian girl in one of the homes, stripped her and dragged her on the streets, naked. No body came, no one interfered. The police stood on the side lines and saw the whole thing go down.

I am attaching a two minute clip, this part of a longer video which I can not share. This was taken live by someone I know (no names, sorry).  Some of the images and video may depict violence.

After the mob went home, they left that village in ash and rubble. This what it looked like when we first got there. 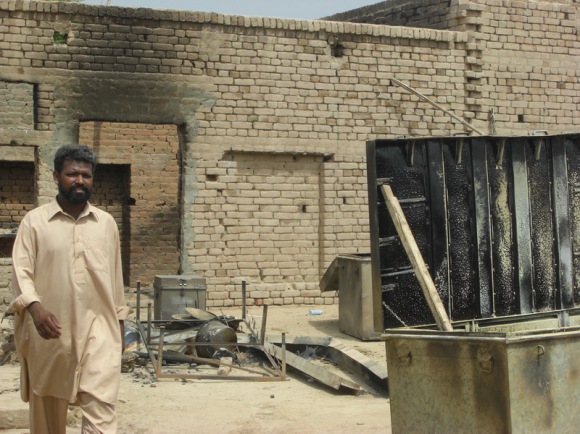 An old woman sits outside her destroyed home. 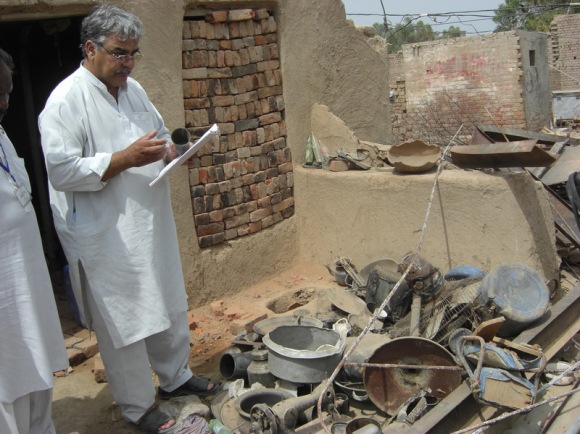 There was almost nothing that was left to use. Utensils, pots, cooking stuff, stored wheat, everything was torched. 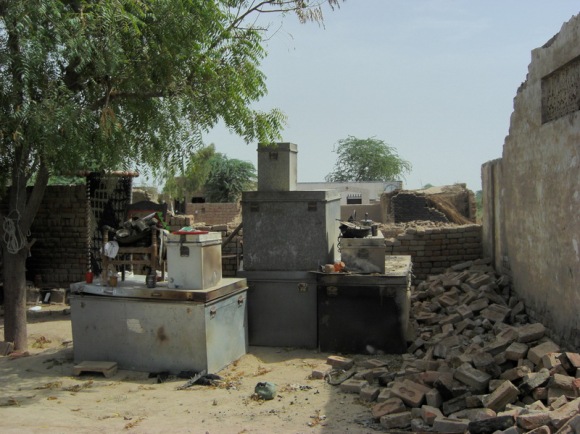 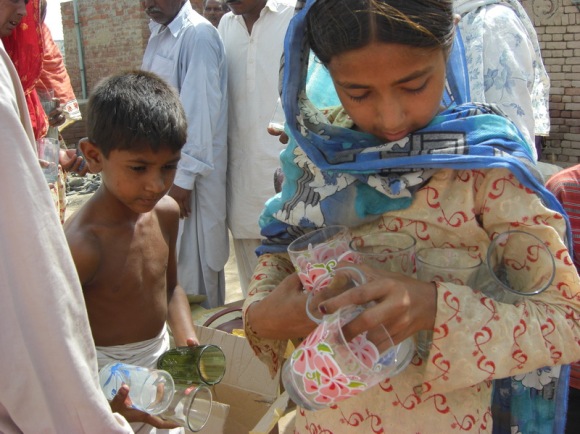 Children taking basic things, like glass and a plate from us for the food we brought.

We took some basic medicine and first aid with us, it fell short immediately. It was only after we saw the amount of devastation that we realized that all of our supplies were less than what was needed. They had no food, no clothes, no beds, nothing to sleep under in winter, but the stars. 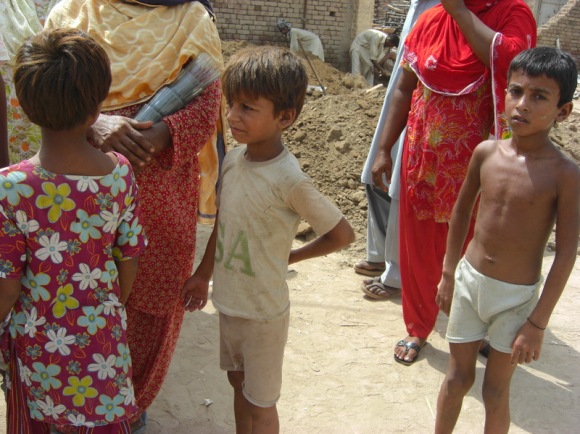 Women gather around to take bandages and medicine.

Some of the things we took with us to to give to the people. Clothes shoes, plates, cups, basic things. 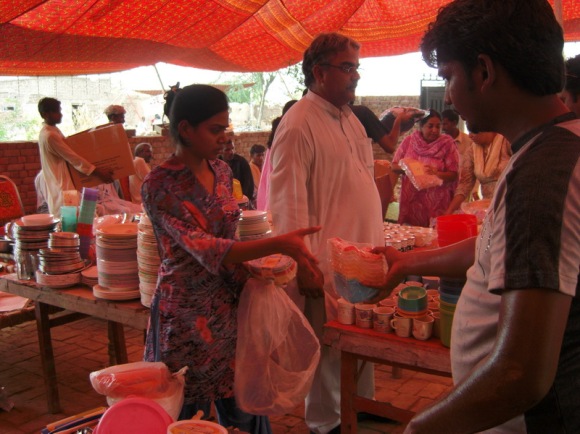 I have many more photographs, there is not enough space to share them all. We went there two three times over and over, with as many supplies as we could get. When I cam home after the first day, I wondered where the world is headed? sounds a big vague question, I know. And yet I find this the most important of all. The victims of Korian and Gojra village, got very little relief from the government. After five years a lot of homes are still to be reconstructed.

All images were taken by me.

By John A. David

A student of theology, a bible teacher and a graphics designer. I ramble a lot about Christian faith, apologetics and atheism.

16 replies on “And then they burnt our homes”

Reblogged this on My Blog and commented:
A reminder to all Christians in America, God is the God of the whole world!

Maybe we are headed toward a world without the caustic dogma and violence of monotheism?

you had to say it…

The world has had monotheism for thousands of years. It has done nothing to stop violence and in fact positively encourages it. One tribe against another, one religion against another and all in the name of a god.

I am amazed that after seeing all of this, your concern is still on monotheism. Shall I post images of U.S.S.R atheist Russia, Khmer Rouge, Pol-pot.Would you then project your view on the situation and admit that people without monotheism are equally mad?

“”The incident of which I am about to share happened in late 2007. The big angry mob, set fire to a whole Christian village. They caught a Christian girl in one of the homes, stripped her and dragged her on the streets, naked. No body came, no one interfered. The police stood on the side lines and saw the whole thing go down.””

Note that you used the word Christian Twice to indicate that this is sectarian violence against Christians.

According to the information about religions in Pakistan, there is roughly better than 95% chance that everyone in the mob that burned the village or tortured the girl are Muslim. In fact, given the numbers it would be highly unlikely that this was anything except religiously motivated hate crimes.

Why wouldn’t I think as I did?

Of course they are muslim.

Muslim on Christian, Jew, and other Muslims violence is happening all over the world. So is Jewish on Muslim, Christian on everyone else (witches, gays, abortionists and more). Without religion to start and fuel their rage, what would cause them to drag a young girl through the streets naked? What would it take to justify burning an entire village down or burning people alive?

It’s not that I forgot that Hindus also commit acts of violence against other religions. It’s just not as prevalent and can be argued that it is in return for violence visited upon them, though I would not do so.

The point is that most violence in the world is directly related to or committed by adherents of monotheistic religions. Monotheism has done little to nothing to stem the tide of violence throughout history … even when it was not directly causing it. When you post pictures of such a tragedy, how can anyone else conclude in any other direction?

this is very thin. religion is exploited by men, men hate and they fight and they use anything they can. simple as that. all religions are not the same. so using an umbrella term wont help. man is evil, with or without religion. religion can not stop violence, people decide to follow it or not.

This post is not about a war between athiem and theism, don’t make it one. exterminating religion wont help, you will still fight, still kill, just for different reasons.

if you want to debate the issue of religion as the cause of all evil, i suggest you do it on your blog. this post is not for this purpose.

Seriously, take twenty minutes of your day and listen to this:

Or, if you’re short on time, read a partial transcript here: http://israelinfaith.blogspot.com/2012/05/where-critics-go-wrong-by-john-dickson.html

I will not hijack this post for it, but it’s worth a look, at least…

This is horrific, John! I pray for this village and others around the world that are being destroyed every day by extremists that only know and believe in violence. This is not the message of “Love” that Christ taught and that we we are trying to bring back into the world. God bless you and thank you for sharing these painful memories!

Thank you for being there, where you are, doing what you are doing. God bless you and your family and the families from those villages. Praying for your country and my own.

My heart breaks for this. Obviously, myathiestlife does not understand the teachings of Christ. Whether there are those who misuse those teachings is not the point. Christianity is the true following of Christ. Anything less than that is a failure to follow Christ.

It s the WAY of Islam..it has worked like this since the start of Islam.
The Religion of Peace that will be in Peace only when the whole world is under Islam.. Submit to Islam.
All those who don’t ,you can do to them what ever you like because they are nothing..and by making them feels that way they might consider Islam..
So what you see for some people is normal…

Thank you so much for bringing this to light with pictures and what you are doing to help. About 5 years back i was able to go to India and experience what life is like there. After returning home after seeing so many beautiful and terrible things, the question plagued my mind of, what is anyone doing about this? Why doesnt anyone else know about this? So i set about and started a not for benefit organization. Nothing big but we were able to do some good and thats the most important thing. Please continue on, you are doing great things by sharing!

I'd love to hear your thoughts, feel free to leave a comment. Thank you. Cancel reply

My view of life from the cheap seats -Art Chartier